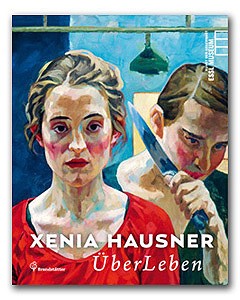 With a foreword by Prof. Agnes Essl, essays by Alexandra Matzner, Rainer Metzger, Elmar Zorn and an interview held by curator Günther Oberhollenzer.

Rainer Metzger
The Journey from Work to Œuvre Three notes on the art of Xenia Hausner
Let me say this right away: Xenia Hausner’s paintings are the result of tremendous, painstaking care. Care that goes into the use of camera and brush, the filling of surfaces, the creating of relationships and calibrating of distances. Care in the way in which nonchalance meets determination and a certain detachment meets untiring dedication. Care invested in a great deal of preparatory work, in arranging, organising, displaying, building models, racks and props and developing poses. (…)
Figuration adds an aspect which is non-artistic, in the original sense of the word. Figuration runs counter to seamless autonomy. Figuration has to do with reality, and the tertium comparationis between reality and image is mimesis, or the imitation of a physical given. This mundane reference relates the painting to the outside world. Hence, figurative paintings will not be part and parcel of the gestures of radicalisation, going-one-better and steady progression that the last century kept dreaming of. This is why figuration was considered reactionary in times of orthodox modernism. Despite its grim determination to maintain a relationship with the world, figuration is timeless, at best. It is about as time-bound as the reality it portrays. Figuration lives on reference, either way. An important aspect in this mundane referentiality is not pictorial but linguistic in nature, however.
Xenia Hausner very often uses the picture-within-the-picture approach, adopting inscriptions, objects and postures which are not simply motifs but are iconic elements known from other visual-art contexts. (…)

Alexandra Matzner
Women without Qualities? On Xenia Hausner’s role-play and the inexhaustible mystery of her paintings
Women – often interacting in mysterious ways – are quite obviously the stars in Xenia Hausner’s oeuvre. Women are simply the more beautiful of the sexes (1), is how the Austrian artist explains why she has been using them as her preferred motif for years. And yet she wants to be considered a painter of human beings, since for her women also represented the male sex. It is usually female faces that intrigue the artist and whose structures she depicts, sometimes delicately and realistically painted, sometimes in thick daubs of paint. The artist’s expressive “grasp” of her figures, or so some people interpreted it in the past, seems to have given them bluish-green hematomas under the skin.2 Symbol-laden red very often plays a major role, it being the metaphor of both love and desire and pain.
The war of materials Hausner wages at the easel with gusto and suffering also includes the painting support, as Xenia Hausner has refused for years to be restricted by the initially chosen formats: depending on her needs, they may grow or shrink in the process. The material used for extensions, often cardboard, is not hidden but brought out in all its contrasting materiality. (…)

Elmar Zorn
Ecce pictus Xenia Hausner’s exposure of painting
With a radicalism otherwise seen only in the great non-conformists of painting history, such as El Greco and Egon Schiele, Xenia Hausner exposes the protagonists of her paintings to their surroundings in collisions of colour that burn themselves onto the spectators’ retina (as in El Greco), unforgettable for those who have seen them – a truly incestuous riot of colours – or in exaggerated bodily expressions at the outer limits of physical and mental nakedness and beyond (as in the contorted postures and stares of the figures transfixed on canvas by Schiele). (…)
Again and again, Xenia Hausner will expose herself, her models and her work to portray that “a life with art“ is a life in jeopardy. The attentive viewer will not be able to withstand the magnetism, the ecce pictus – “behold this wounding and wounded art” – of these paintings of life and art that implode onto the canvas. In a certain way, the viewers will even find themselves tumbling into the pictures in free fall.
There is never anything less than that at stake for Xenia Hausner.