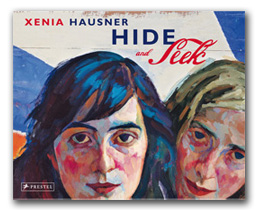 With a foreword by Beate Reifenscheid and essays by Carl Aigner, Rainer Metzger and Katharina Sykora

Rainer Metzger
Pictorial Sovereignty
An attempt at a theory behind Xenia Hausner’s art
(…)“Its theatrical dimensions have been reinvested in the pictorial image.” That is how what has just been proposed sounds in a text by the New York theoretician Douglas Crimp in the year 1979. Crimp noticed that the gestures of presentation, having grown ever more important in art since the late ‘60s, gestures articulated in performance, in films and videos, gestures which were in effect incorporated into the discussion of the theatrical, had once again caved in to the squareness of the traditional picture format. (…) The fact that staged and pict­orial elements, the act of compulsion and the medium of authenticity henceforth merged, was something new. Crimp organized an exhibition, simply calling it “Pictures” and managed to turn it into one of the central premises of the Postmodern.
It is superfluous to mention that such a premise has managed to express the manifesto of Xenia Hausner’s picture world. And it is of notable consequence, when something that Crimp had once expounded has become reality: “Performance becomes just one of a number of ways of staging a picture.” That is nothing less than a declaration of the sovereignty of the picture. When in Xenia Hausner’s realm theater people, actors, extras yield to the performative, then it is to execute their poses so as to make an image, a picture, a panel painting,a squareness of forms and colors come about. “Staging a picture” is the perfect, the very literal formulation of Hausner’s strategy of pictorialization.
It is obvious that a moment of déjà vu, of repetition, of routine is at the root of playing a role and is quite advantageous for the artist. To stage a picture has something to do with repertoire, and especially in the most recent works of Xenia Hausner one finds elements of the repetitive more strongly emphasized. There are pertinent quotes, borrowings, take-overs from her own craft, paraphrases of the motif of a basketball in the aquarium as in Jeff Koons’ work or of tin sausages from Frank West. Sometimes the repetition is more than just the appropriation of a single piece, when for example a photograph one recognizes as Max Ernst’s is set into a composition in painterly fashion. Natur­ally the poses are taken from a personal stock of equipment and form, a kind of body idiom that makes Hausner’s works altogether unmistakable. Pictures in the present are never just present in naivity and innocence. Rather, they belong to an archive of visual elements that one has at one’s command from the start whether consciously or not. Or as Crimp expresses it: “Underneath each picture there is always an­other picture.”
There is another consequence, and it too is explicitly drawn into this work: the parallelism of painting and photo­­g­raphy. Here too Xenia Hausner’s works are clearly beyond modernistic, most evidently emancipated from the relationship to form. Both photography and painting contribute to that pool of motifs one helps oneself to when an image, a picture, something pictorial is supposed to evolve. It can be a painting that evolves, a photograph or a mixture of both, that hybrid form that makes every aesthetic form capitulate. One last point which focuses on the problem from the opposite end: it is marked by a special quality of Xenia Hausner’s, the attempt to overcome the squareness of the picture, the panel picture form, and to piece on parts, to push beyond the accustomed dimensions, and in this way to put the format, the manner into question. The picture isconfirmed by perceiving it as a corset, a limitation of freedom. But the picture stages itself all the more impressively in just such demonstrations of a denial.

Katharina Sykora
Pick-Up-Sticks in Reverse. Figure – Configuration – Defiguration
Pick-up-sticks I – The magic game
(…) Meanwhile a rational, male, coded conceptual painting style appears to stand in opposition to an empathetic, female humanistic one. The fact that the artist places herself “in the middle”, doing the one and not allowing the other moves through this and many other pictures of hers as a leitmotiv. She is shooting herself in the head with just “one left hand” while her right hand is apparently continuing to portray itself. Meanwhile, her “male” creator hand remains ironically “under the table” as if it had been cut off, while the pinkish knob of the striped jar turns up right there in front of the unsubstantial upper body where we would expect the “female” curves of the the breasts to be. In the interplay between figure and fundament, form and thing, colors and shapes, a kaleidoscope of multiple meanings, complementing each other, crossing over, overlapping, contracting, unravels as we watch. Chimaeras or doppelganger are often the result: the male-female artist, modern twin figures à la Snow White and Rose Red, paired lovers among humans and humanlike things.
Pick-up-Sticks II – The cruel game
The hand raises each single colored element from its neighbor without shaking. Finger acrobatics, unhinging the artful construction gently and with concentration, releasing associations, drawing the sticks back into its power. That too carries magic features. Too bad that gesture has pretty much lost its magic thanks to the undo button in electronic media. The act of taking-back thus becomes an analytical anatomy, undoing that lucky throw of an artwork by comprehending it after the fact.
Pick-up-sticks III – The game of double dealing
The ogling increases when configuration and defiguration coexist, when for example details beyond the abyss of their interfaces enter into unimagined alliances. Many of Xenia Hausner’s pictures look like that. Here the impetus of a sculpture by Tony Cragg dances a pas de deux with the crook of the arm of a model, there the contour of a grand piano encounters the sharp curve of a chic hat, or the radiating folds of the backrest of a sofa correspond to the curve of a red floor lamp. At this moment it is as if we were watching the artist put together the structure of her painting color for color, detail for detail, figure for figure right before our eyes. The lucky throw reveals itself as a work of construction. It is carefully put together through emphasis and analysis, tangled in a steady interplay of insistence and resistance. (…)

Carl Aigner
XENIA HAUSNER. From painting to photography and back, extended Version
In contrast to those involved in digital photo art I use the painter’s tools of trade: brush, paint, scissors, cardboard, and establish via “analogue” means a liaison between color and photography, says Xenia Hausner precisely and compactly, describing her artistic method to produce pictures. Since 2003 she has been working with the possibilities of “mixed media”, a focal point of painting and photography with a long history in art and image. (…)
In particular the subject of extended portraits his become an interface for photography and painting not only as meeting place but to stimulate mutual growth and public exposure – right into the present. The human image especially has been the venue of that projection where real and imaginary cross, and subject exposition – both intimate and public – has been attained pictorially; where reality andfiction have in truth always wedded. The human image is a basic theme of the artist Xenia Hausner. She celebrates it in large formatted “paintings” as an existential omen of human form, which is to say that the means of expression is never meant merely as a copy but as a complete physical andpsychological exploration. Hers are intimate psychograms and physiograms, exposures, embedded in scenery and object environments, they are inflictions in the sense of being inflections which evoke – not insignificantly – the narrative realm of personages, setting the stage so to speak for apictorial mini-drama. The use of photographic images plays an important role in the preparations for the paintings right from the start: photography has again and again been enlisted by her as an aid to visual memory or as a tool for work processes and compositional design and utilized in the “antechamber” of painting. (…)